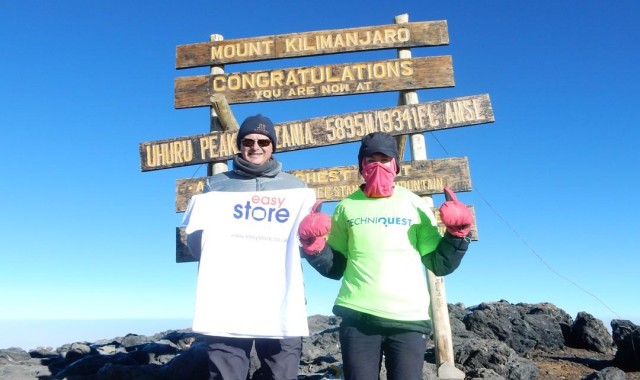 South Wales self-storage firm Easystore Self Storage has braved Africa’s highest peak, Mount Kilimanjaro, as part of its latest awareness-raising efforts to support its charity of the year, Techniquest.

The charity works to bring Science, Technology, Engineering and Maths (STEM) to schools in disadvantaged areas of South Wales – a programme supported by its annual sponsors.

Director of Easystore, Brendan Connies-Laing along with Clare James, the Fundraising Manager at Techniquest scaled over 19,000 feet to the summit of the dormant volcano, famed for both its demanding climbs and its scientific importance.

The stratovolcano acts as a barometer of climate change over the centuries, giving scientists evidence from as far back as 500,000 BP (before present). Today, the effects of climate change are already apparent, with its glaciers shrinking and ice fields disappearing. Current studies at the site suggest that the famed snows of Kilimanjaro are likely to disappear by 2033.

Speaking of the arduous climb, Brendan said it was one of the toughest challenges of his life: “The climb was incredibly difficult, stretching over six days in tough conditions. There is no doubt that it was worth it though, as the site is truly a marvel of nature. Given the steep cost of the trip, rather than fundraise we decided to self-fund and make the focus of the climb about raising awareness of Techniquest and its STEM programmes.

“The centre does fantastic work to bring these crucial academic subjects to schools across south Wales; we hope that us making the 19,000 foot climb to one of the world’s important scientific sites will help raise awareness of the importance of STEM, and highlight the outreach projects of Techniquest.”

Easystore announced Techniquest as its charity of the year in February, stating a shared ethos of promoting STEM to school children and young people.

CEO of Techniquest, Lesley Kirkpatrick said that she hopes events such as these will help raise awareness of the importance of STEM in education: “Techniquest’s mission is to embed science in Welsh culture through interactive engagement and we reach thousands of children in some of the most disadvantaged areas of Cardiff and Bridgend, making sure that children who are unable to come to our Science and Discovery Centre are still able to benefit from our inspiring programmes.

“As automation and low-skill jobs begin to disappear, it will be even more important to ensure the next generation is equipped with the tools to tackle the growing economic and environmental challenges we face. Getting children interested in these subjects is the first step in that crucial journey.

“We rely upon Welsh business partners to increase awareness of our work and we’re absolutely thrilled with Easystore’s continued support for Techniquest – we are truly privileged to be their charity of the year. I’d like to offer huge congratulations to Brendan and Clare for their fantastic achievement in managing to reach the summit of Kilimanjaro.”