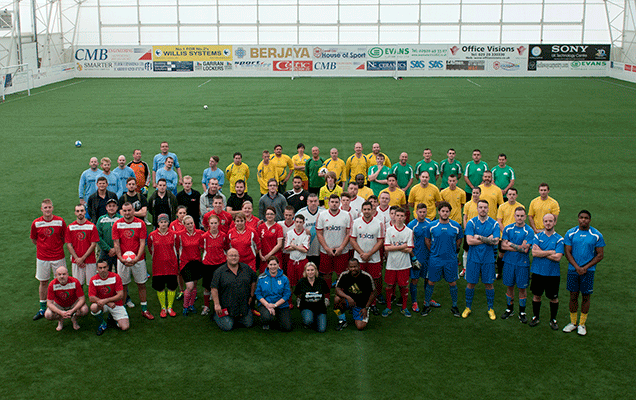 Staff from across the Welsh housing sector donned their football boots recently and raised an impressive £580 for Street Football Wales (SFW), to help get their team to the Homeless World Cup.

Nine teams came together for the friendly 6-a-side football tournament to support Community Housing Cymru – the representative body for housing associations in Wales – in its bid to raise £15k for SFW at the House of Sports, Cardiff, on Saturday (6th September).

After three hours of fast-paced and demanding action, Rhondda Housing Association took the cup title and the proud players were crowned housing sector champions. The Community Housing Cymru team came a close second as cup runners-up, whilst Tai Calon won the plate and Newport City Homes were named plate runners-up. The teams were presented with their trophies by Kathy Smart, Chair of the Board for Wales & West Housing.

Talented SFW Ambassador and professional football freestyler Ash Randall was present to show his support, with the three-time Guinness World Record holder wowing the audience with his skills. A raffle – with prizes including a signed Cardiff City shirt – was also held, raising £180.

The tournament was also attended and supported by Welsh women’s international footballer Loren Dykes. Loren said: “SFW is a fantastic cause giving vulnerable people experiences and opportunities that will make such a difference to their lives. I’m honoured to be involved with this event and to give these people a once in a lifetime experience to go to the Homeless World Cup is truly something special that they will never forget.”

Street Football Wales (SFW) is a social inclusion project run in partnership with the Welsh housing and care provider Gwalia and funded by The Big Lottery. The project engages and supports individuals affected by homelessness, substance misuse and ill-mental health through street football leagues organised throughout Wales.

The 24 male and female players of SFW, all of whom have experienced homelessness and social exclusion, will be heading to Santiago in Chile next month to take part in the 12th annual Homeless World Cup, where over 64 countries are competing. Having being selected to represent their country at the prestigious event, the SFW team now needs to raise in the region of £30k to cover costs such as flights, accommodation and food. Community Housing Cymru aims to raise half of that total (£15k) as part of a collaborative fundraising drive amidst its members.

The Wales & West Housing tournament is the latest in a number of fundraising events that have been organised, including a housing sector vs SFW charity football match at the recent Eisteddfod and a ‘wear a football kit to work’ day. 13 staff from Community Housing Cymru also took part in the Cardiff 10k on Sunday to raise further funds for the cause.

Event organiser Herman Valentin, from Wales & West Housing, said: “I love football, so jumped at the opportunity to arrange a tournament and help SFW. To take part in the Homeless World Cup is a life changing opportunity for these players who have surmounted various difficulties that life has thrown at them. It’s a fantastic cause and we’re delighted to have been able to help. I want to thank everybody who took part in the tournament and showed their support.”

Cardiff-based self-storage company Easystore attended and supported the tournament after pledging to donate £500 towards the cost of the SFW team kits. Director Brendan Connies-Laing said: “It was an honour to be involved and sponsor the team strips. Homelessness is a huge issue in Wales, and we are fully supportive of what SFW are trying to achieve. It was brilliant to see such a wave of support from across the housing sector and we look forward to being involved in future initiatives.’’

Interim Chief Executive Sioned Hughes of Cardiff-based Community Housing Cymru, said: “The Welsh Housing sector has really got behind fundraising for SFW. As a sector, SFW’s aims and the issues they work to tackle to help those in need mirror so many of our own. Their organisation is helping to change and improve lives, reducing social exclusion and increasing empowerment and progression opportunities for so many people. We are so pleased as a sector to be able to help this great cause.”

Keri Harris, Project Leader for Street Football Wales, commented: “The players selected for the Homelessness World Cup are those who have trained hard over the year and all have shown great progress. Taking part in the annual tournament will give people a sense of self-worth, pride, respect from others, a sense of achievement and a desire to reach their life goals.
“Street Football Wales really does transform people’s lives; I’ve seen it first-hand. A number of SFW players have gone from living on the streets to turning their lives around, getting a home, a job with SFW and then helping others who are now in similar situations to what they were.”

Anne Hinchey, Chief Executive of Wales & West Housing, said: “Wales & West Housing is proud to be supporting Street Football Wales. It’s a fantastic organisation whose aims are so similar to our own in striving to make a difference to people’s lives and communities.
“The opportunity to attend the Homeless World Cup will be life changing for these players, who’ve worked hard and overcome such adversity to get where they are today. We’re delighted to have been able to support Community Housing Cymru’s fundraising drive alongside our housing association partners, and wish the Street Football Wales teams the very best of luck in Chile.”