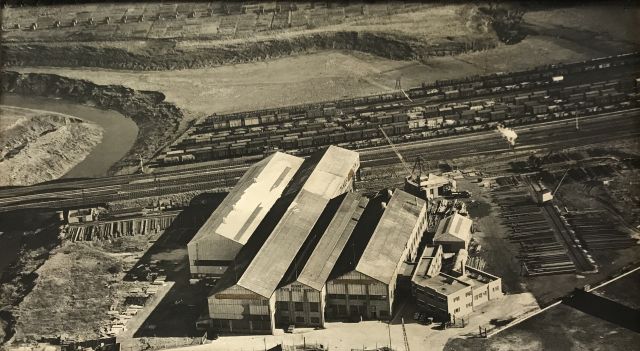 Easystore’s Cardiff HQ is situated on the Connies site – a landmark building that was established in the 1940s. The land sits amid the bustling Rhymney River Bridge Road, an area of huge historical and logistical significance.

A Focus on Rhymney River

Thought to have been built as a bridge leading to a Roman camp at Rhymney Hill, the area appears to have been inhabited since the Bronze Age. Roman pottery has been found in the area, likely to have been crafted from clay taken from the river.

Fast forward a few thousand years and in the late 1930s the site became a hub for the steel industry due to its proximity to the railway. The Connies site – where Easystore and Connies of Cardiff is now situated – manufactured steel bridges and railway sidings that would then be transported all across the country.

During World War II, the site became an important part of the war effort, manufacturing Bailey bridges for the Allied campaign. The bridges were lightweight enough that they could easily be carried by trucks and didn’t need heavy machinery to assemble.

The bridges manufactured at the site would go on to be used by British, Canadian and US forces. However, this made the site a target for German bombing, and the greater Cardiff area did not go unscathed.

During the war, many of the factory workers were enlisted, and so for the first time, women began to take up labour-intensive roles. At one time, the site had over 200 female welders and several female crane drivers – skilled positions that had previously only been occupied by men.

What was also remarkable about the area was that up until the 1970s it was the natural border of England and Wales, as Monmouthshire – which was not classed as an official part of Wales until 1974 – stretched up to the Rhymney River.

Today the site is mainly made up of retail outlets, offices and – of course – self storage units.

What does the area mean to you?

The history of Rhymney River has an intertwined relationship with Easystore owner Brendan that stretches back centuries, with the Connies family tree firmly set in the area. Brendan tells us what the area means to him, and why he chose to base his headquarters there: “My family have been here since the 30s and have seen all the changes and challenges the area has weathered. We were prominent in the steel industry until its decline in the early 80s when they then moved into the office rental business.

“The reason I chose the site as Easystore’s headquarters is the same reason so many businesses set up in the area: location. Just two miles from the city centre and half a mile from the A48/M4 link, you can get to and from the area easily, from anywhere in South Wales.

“With the planned investments of the Cardiff Capital City Deal and the proposed M4 relief road, the area is only going to become more popular and prosperous.”

Need storage? Our Cardiff storage facilities are conveniently based, accessible 24/7 and fully secure. Find out more today or get an online quote.