10 Reasons Why You Should Consider Moving to Cardiff

Thinking of moving to Cardiff? We’ll be honest: the Welsh capital is awesome at the moment. Crammed with culture, local colour and a thriving foodie scene, this warm and affordable corner of the world is getting trendier by the second – oh and it’s surrounded by a wealth of natural beauty. What’s not to love eh?

Cardiff Castle (with Millennium Stadium in the background) & Roath Park Lake
Not convinced yet though? Well if that’s the case, here’s a few reasons why you should consider relocating to Cardiff and start calling it “cartref” (that’s “home” to you and me)…

10 Reasons for Moving to Cardiff:

Restaurants in Pontcanna & Cardiff Bay
You probably associate amazing gastronomy with larger, more traditionally multicultural cities like London, Birmingham and Manchester – but Cardiff is a serious foodie hotspot. Unlike larger cities, different cuisines don’t have dedicated “neighbourhoods.” There’s no Chinatown or Balti Triangle (like London and Birmingham) – instead, an entire globe’s worth of cuisine can be found in most corners of the city.

In Canton alone (west of the city centre) you’ll find Korean, Argentinian, Japanese, Chinese, Italian, Spanish, French, Lebanese, Turkish and Indian restaurants all clamouring for your custom. The majority of eateries in the city are very, very good indeed. With a lower cost of living, eating out is also unexpectedly affordable, making eating very well very easy in the Welsh capital. Don’t miss out on the city’s annual food festival or its regular Street Food Circus events.

Oh, and if you like burgers, Cardiff has tons of burger joints. Tons of them. So much so that an American guy visited a bunch of them around the city and reviewed them. It’s a burger fan’s idea of heaven…

Google Map of Cardiff showing the distance from the city’s edge to the centre
…That is, for a major city at least. Walking from one side of Cardiff proper to the other won’t take more than a few hours at a leisurely pace – zipping through on a bike is even quicker! You can drive from the edge to the centre in about 15-20 minutes, too. This makes Cardiff a very accessible city, even if its bus service doesn’t run all night. 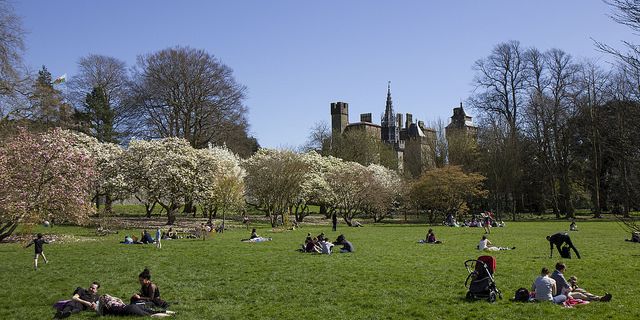 Cardiff’s Bute Park
Centred around the historic Cardiff Castle and Bute Park, Cardiff has no shortage of green spaces to enjoy. From Roath Park’s boating lake, to the sprawling Pontcanna Fields and pretty little Thompson’s Park in Riverside, you’re never far from a beautiful bit of greenery. And the gorgeous South Wales countryside is just a short drive away.

The infamous rugby ball in Cardiff Castle’s wall & some Welsh rugby fans
You’ll almost certainly already know about the Welsh passion for rugby – this is no exaggeration. In Cardiff, every national match day sees the whole city make a beeline for a stadium seat or big screen (preferably in a pub), then pour out onto the streets in a celebratory mood. It’s great, infectious fun even for non-rugby fans. You’ll be wearing a daffodil shaped hat before you know it – trust us.

If rugby isn’t your thing but you are into fitness and physical activity, Cardiff is right there with you. The city spends more on gym memberships than any other metropolis in the UK (£643 per person annually), which means that it’s home to some excellent facilities, clubs and activities. Outside of the gym, amazing bike and running trails, water sports activities, roller derby clubs and other sports teams are ready to make you sweat.

Well, comparatively at least. As of early 2017, the average cost of a basic one bed flat in the city centre was around £600, while a basic three bed house would set you back £110,000. That’s a considerable cost reduction compared to neighbouring Bristol and a far cry from prices you’ll find even on the outskirts of London. Add to this lower food prices and lower transport costs, and you’ve got yourself a much healthier looking savings account.

7. It’s in the heart of nature

Brecon Beacons & Three Cliffs Bay, both just over an hour’s drive away from Cardiff
There are few major cities from which you can drive in any direction and find yourself amidst fantastic scenery within an hour or less. From the coast to the south, the River Wye to the north-east and the Brecon Beacons to the north, there are some astonishing areas of natural beauty to discover a stone’s throw from the city.

If you have a little more time, the glorious golden sands of the Gower peninsula are almost on the doorstep, while hikers and cyclists can walk along the Taff Trail from the centre of the city all the way up to the top of Pen Y Fan (South Wales’ highest peak) in just one day.

Cardiff International Airport now offers very affordable flights to locations all over Europe and, even some further flung destinations. Direct flights can currently be taken to exotic spots like Gran Canaria, Qatar, Barbados, Florida and even Lapland, straight from Cardiff.

In terms of travel within the UK, it’s just two hours by train from Cardiff to London Paddington.

(Speaking of London… If you’re moving to Cardiff from London specifically then we have a dedicated post for that.) 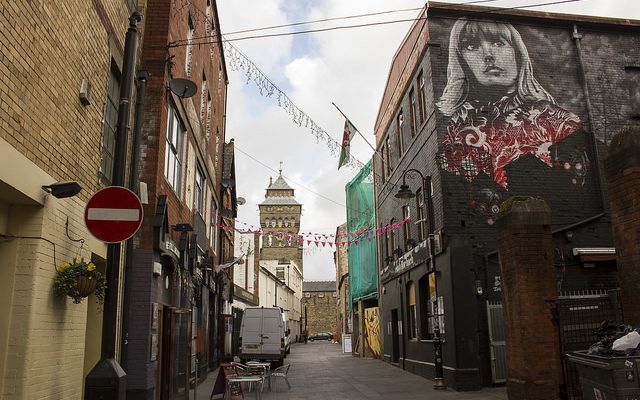 Womanby Street, the heart of local live music in Cardiff
Move to Cardiff and you’ll soon discover that there’s no shortage of goings on in the city to keep you entertained and to keep your finger on the pulse: from the much-loved Chapter Arts Centre, to the Swn Music Festival, pop-up cinema events in the Castle, Hub Festival, Oktoberfest and Inside Out Festival. There’s even a city-wide coffee festival if you’re a big fan of beautifully roasted beans. With a friendly vibe and affordable venues, getting your cultural fix is no trouble – whether you’re into music, theatre or art.

10. The Welsh Assembly Government gets some stuff right 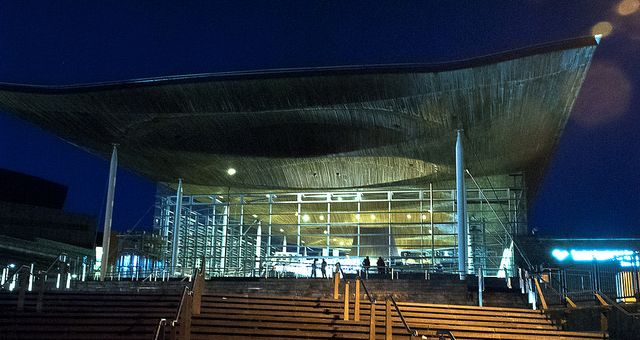 The Senedd (a.k.a. the National Assembly for Wales) building, Cardiff Bay
While no government is without its flaws, there are a few things the Welsh Government seems to do a bit better than its English cousins. When it comes to women’s health especially, the Welsh seem to be doing things right, from free prescriptions and earlier cervical cancer tests starting at 21, to an “opt out” system for organ donation implemented in 2016, there a few surprisingly progressive policies to be uncovered in Wales.

Ready to make the move to Cardiff? Easystore Self Storage offers conveniently located storage units in Cardiff and Bridgend – ideal for when you want to get settled. Contact the Easystore team today for a quote and croeso i Gymru (“welcome to Wales”)!